Since Jainism firmly believes in the doctrine of karma and puts sole reliance on the development of the spiritual force by one’s own personal efforts, and further exhorts its followers to develop Asarana-bhavana (none other can refuge or save us), the question that naturally arises is, what is the place of prayers in Jainism? Since the Jains do not believe in God or in the existence of any outside Divinity controlling our fate, any idea of prayer would be irrelevant to them for two main reasons.

1) The soul which has been emancipated and became Siddha has no desires or motivations left. Its character is purely that of a knower and a seer. If, prayers could please Siddha then some prayers could also displease Siddha. In the same sense if Siddha could bestow favours or frowns then attributing such human frailties to a Siddha (liberated soul) is to deny soul’s liberation. Same way even though Arihants are living superiors souls they are also unaffected by what is happening in this universe and do not get affected by what we do or do not.

2) Once we accept the doctrine of karma, all results must be sought in that doctrine and therefore unless the prayers are adjusted in the karma doctrine, they remain totally non-productive.

We pray to those
who have led the path to salvation,
who have destroyed the mountains of karma, and
who know the reality of the universe.
We pray to them to acquire their attributes.

So, it would be totally wrong to say that prayers have no place in Jain philosophy. Jains do not consider prayers as a means of seeking favours from Siddha or even Arihants. True Jain prayers are nothing but the appreciation and adoration of the virtues possessed by the liberated or Arihants and the expression of ardent desire to achieve these virtues in one’s own actual life. It is for this reason that Jain scriptures have actually enumerated the virtues of different categories of souls such as Arihanta, Siddha, Acarya, Upadhyaya and Sadhu.

It is basic to the Jain belief that the Tirthankars (prophets) and their teachings are only to point out to us the way to achieve liberation. But how to acquire liberation and how to put these teachings into the practice, is entirely left to us. We achieve only to the extent to which we exert. However, the path shown by those who have achieved liberation must be studied with utmost respect and sincerity, because it is the proven path, which they have actually taken during their lives and have obtained the results. We feel very thankful to these great souls for providing us such useful guidance. Therefore, in prayer we express our gratitude, admire and enumerate their virtues and wish that such virtues might also develop in our life. Such prayers constantly remind us what made them great and in turn help us to develop such virtues in us. In Jain philosophy, this is the process of prayers.

It is interesting to note that the most outstanding Jain prayer, known as Navakara Mantra, is not referred to any individual personal or sect and asks for nothing in return. It does nothing more than offering sincere veneration to those souls, which are already liberated or are on the path of liberation.

As Acarya Hemcandra puts it:
“Bhava bijankura-janana ragadyah ksayamupagata yasya,
Brahma va Visnurva Haro Jino va namastasmai.”
Meaning, “I bow down to him whose all passions like attachment and malice, which sow the seeds of birth and rebirth, have been destroyed. It doesn’t matter whether he is Brahma, Visnu, Sankara or Jina.”

The Jains have built big and beautiful temples and are adoring, elegant and serene marble idols of Tirthankaras. Idol-worship has its own rights and Jains seem to have adopted the same at a subsequent stage because Jain scriptures have not recorded that Lord Mahavira at any time worshipped an Idol. (Some sects of Jain do not believe in Idol-worship.) In fact the whole emphasis of Jain doctrines is on the Atman (soul) which has no form. It would, however, undoubtedly follow that adoring the idols by jewelry and other ornaments and taking out processions of idols etc. have no philosophical background or justification – except perhaps expressing devotion.

Thus, prayers or bhakti are differently perceived by the Jains but they do occupy a prominent place in Jain thinking.

As seen earlier prayers are done for admiration and resolve to improve oneself. But then there are also prayers done to remind us to stay on right path and be vigilant as well as seek for repentance, forgiveness and make some resolutions for future and seek peace in the universe.

Every evening and in the morning we do Pratikraman (combined prayer to repent, and make a resolution to be better person). We seek forgiveness from others and offer forgiveness to break the knots of hatred agitations. 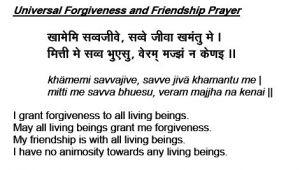 We seek peace in universe for every soul friend or foe.