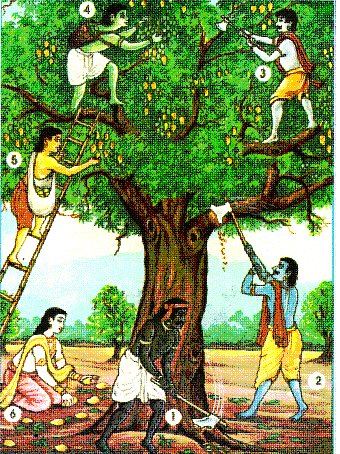 Once there were six friends, who were going on a trip. Along the way, they got lost in a forest. After a while they were hungry and thirsty. They searched for the food for sometime, and finally found a fruit tree.

As they ran to the tree, the first man said, “Let’s cut the tree down and get the fruit.” The second one said, “Don’t cut the whole tree down, cut off a big branch instead.” The third friend said, “Why do we need a big branch? A small branch has enough fruit.” The fourth one said, “We do not need to cut the branches, let us just climb up and get the bunches of the fruit.” The fifth man said, “Why pick those many fruit and waste them, instead just pick the fruit that we need to eat.” The sixth friend said quietly, “There are plenty of good fruit on the ground, so let’s just eat them first.”

You can see that the states of minds of these six friends caused a range of thoughts that begin with the destruction of the entire tree and ended with the picking up of the fruits on the ground. The six friends’ minds represent six types of leshyas.