Dr. Mahendra K. Pandya passed away on August 17, 2022, in New York at the age of 87. His departure to his heavenly abode ended a golden era for the Jains of New York and indeed, for all the Jains of North America. For he brought an air of dignity and moral leadership to every position he held. He led by acclamation and left his position of leadership with enhanced credentials while everyone clamored for him to continue for another term. He knew when to lead and when to leave. He was a humble and quiet man and saw public service as his Dharma and a privilege.

Dr. Mahendra Pandya arrived in the US in 1966 after completing his MD at Gwalior Medical University. He came to the US for further studies and practiced medicine, Cardiology, and Internal Medicine, in NY from 1972 to 1997. Once settled, Asha Rani, his wife, and two sons Sanjay and Rajeev joined him.

During his medical residency, he, and Asha behn started looking for other Jains in NY not just for companionship but for fulfillment of spiritual needs. Those were the years of no organized Jain activities in America and no place to assemble to pray or socialize. During the 1960s there were just a handful of Jain families in NY. They discovered two family friends from back home – Dr. Narendra K Sethi – professor of Management at St. John’s University, Dr. Duli Chand Jain (publisher of Jain Study Circular) and his wife Sunita Jain. They also connected with Dr. Jagdish and Madhu Sheth – a research assistant at Columbia University, and Surendra and Sushila Singhvi – graduate students at Columbia University. These five families were eager to create a fraternity of Jains. Soon they connected with Dr. N. P. Jain, India’s ambassador to the United Nations and some of the diamond merchants in NY such as Kamal Surana, Dr. Rajni Shah, Dharamchand Hirawat, and Vijay Tongya. During the 1960s and 70s, Dr Pandya and Asha behn’s residence became a haven and source of support for many Jains who were newly arrived from India. Dr Pandya also gave free medical assistance and counsel to many Jain families who had recently arrived and did not have medical insurance. 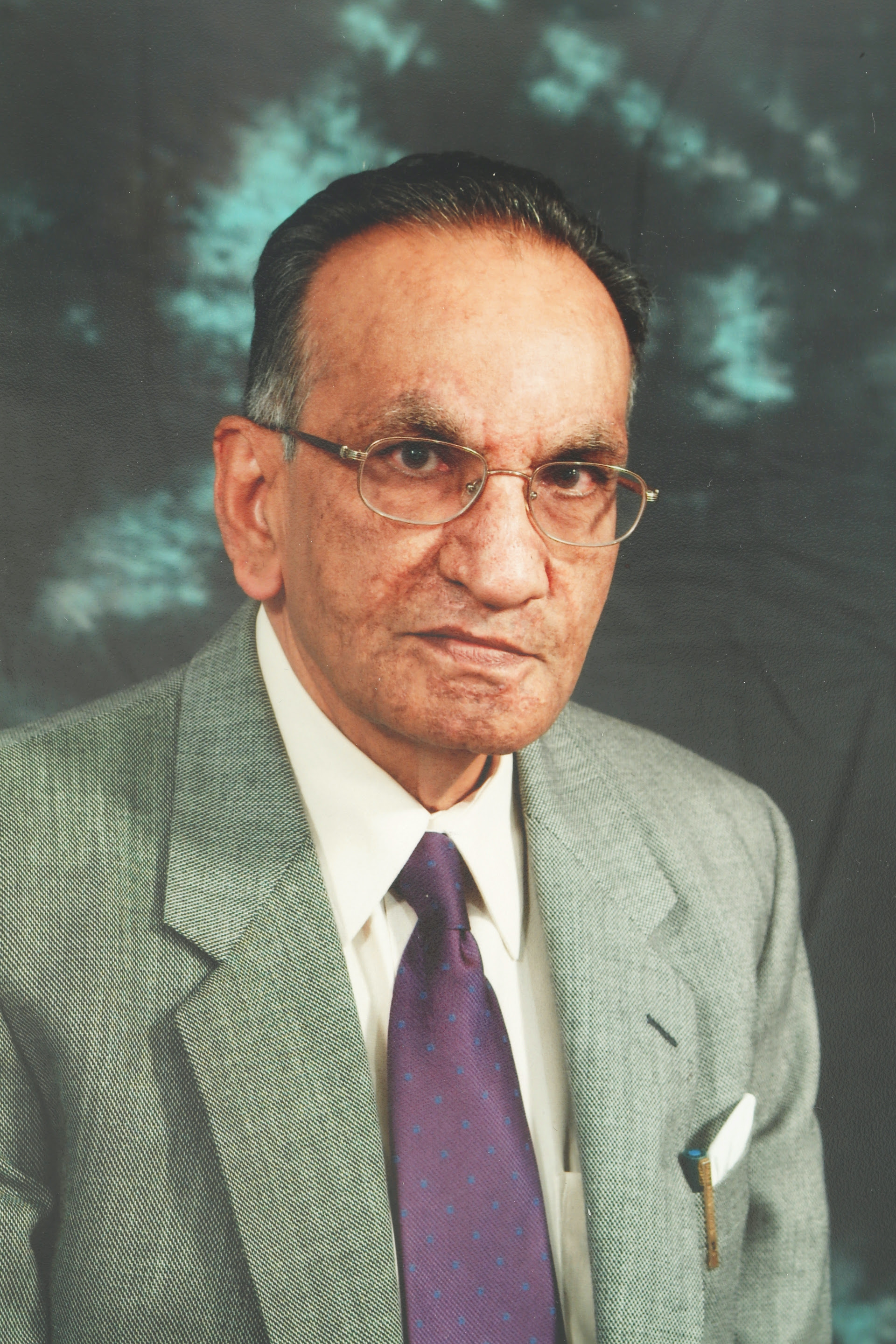 These Jain friends formed a Jain group under the leadership of Dr. Narendra Sethi and their first meeting was held at Columbia University. Dr. Pandya was nominated as the treasurer who paid for all the expenses of the group out of his own pocket. They began to hold monthly meetings at Columbia University student’s hall. Dr. Pandya’s wife Asha Rani and other ladies prepared vegetarian meals for the meetings that attracted lots of students and eventually many Jains from all the boroughs. The news of these monthly meetings was published in the New York Times as the formation of the first Jain Center in North America. In 1976, they formalized the group as The Jain Center of America (JCA) with Dr. Sethi as their President and Dr. Pandya as Vice President. They frequently held their meetings and celebration of Mahavir Jayanti and Diwali at the Indian Consulate in Manhattan under the Guidance of Dr. N. P. Jain. They also met and worshiped at Gurudev Shri Chitrabhanuji’s Jain Meditation Center in Manhattan and other Secular Halls in New York.

After the retirement of Dr. Sethi, Dr. Pandya became the President of JCA. In 1981, with the blessings from Gurudev Shri Chitrabhanuji and Shri Sushil Muniji, and a major financial contribution from Dr. Pandya, JCA purchased a small house in Queens for their religious activities. This is the site where the present four-story modern Jain Temple with a replica of Ashtapad Tirth, beautiful artwork, and separate floors for a Digambar and a Svetambara Temple stands. All five traditions of Jains are represented in the four-story temple – celebrating Jain Unity with respect for Diversity. This world renowned unique and unified Jain Temple is a living testimony to Dr. Pandya’s belief that all Jains should be united.

In the 1970’s Dr. Pandya organized celebrations in New York and the Indian Consulate for the celebrations of Mahavir Bhagwan’s 2,500 Nirvana Anniversary attended by many important dignitaries from India and the US.

All along, Dr. Pandya was the main supporter of Sushil Muni’s ashram in Staten Island. In the early eighties, Dr. Pandya, and Dr. Tansukh Salgia collaborated in the months-long search for a larger place in Poconos for relocating Sushil Muni’s Ashram. For their long days of search, Pandya ji would provide rides from Staten Island and home-cooked food. They finally settled for what is presently known as Siddhachalam. Here too, Dr. Pandya was a major contributor, fundraiser, and negotiator for purchasing of the property. Sushil Muni appointed Dr. Pandya a lifelong Trustee of Siddhachalam.

As President of JAINA, Dr. Pandya, in the very first meeting of the board of directors moved a resolution to make JAINA (not any Sangh) the convener of all the future JAINA conventions. He established the JAINA Calendar program and Mini Library initiative for Jain homes. His vision of producing a large wall calendar with the twelve most exquisite colorful photos of Jain Temples from all over India complete with descriptions and many miniature photos of the artful interiors is now one of the most successful projects of JAINA. Over 14,000 calendars are mailed cost-free to JAINA members annually. His JAINA Mini Library consisted of three scholarly Jain books in English. He mailed out over 3,500 sets free to JAINA members who had donated to JAINA. He traveled to over 20 Jain Centers in US and Canada and convinced many Jain centers to follow a non-Sectarian approach to building their Jain Centers. He presided over the 2001 JAINA convention in Chicago as President as well as the 1999 JAINA Convention in Philadelphia as the Vice President.

In the year 2000, the Millennium World Peace Summit of Religious and Spiritual Leaders was held in New York at the United Nations. The meeting recognized the importance of religion to world peace and faith leaders’ commitment to peacekeeping, poverty relief, and environmental conservation. Dr. Pandya and others represented JAINA and the Jain faith.  Mr. Bawa Jain was the Secretary-General of the Millennium World Peace Summit.

The most illustrious example of the moral leadership of Dr. Pandya is his accomplishment at the US Capitol. In a first-ever invitation by the House of Representatives to any religious leader from India, Gurudev Shri Chitrabhanuji was invited to deliver the opening prayer in May of 2001, as a celebration of the 2600th Birth Anniversary celebration of Bhagwan Mahavir. For American Jains, it was a history-making event. Over 140 Jain delegates from all over North America along with the representatives from the Indian Embassy, JAINA President Dr. Pandya, and several Past JAINA Presidents and Presidents of several Jain Centers in America attended this memorable event.

The biography of Dr. Pandya would be incomplete without mentioning his charitable activities outside JCA, JAINA, and Siddhachalam. He was the foundational supporter of ISJS – International School for Jain Studies, an innovative program designed by Dr. Sulekh Jain and Dr. Cromwell Crawford from the US, and Dr. Shugan Jain of Delhi. The program consisted of sending a group of American college students to India during the summer vacation for 3 or 4 weeks of full immersive Jain studies. The students were asked to pay just a small fraction of the cost of travel, lodging, and boarding thanks to the financial support of Dr. Pandya year after year.

Dr. Pandya quietly gave to many Jain causes like: 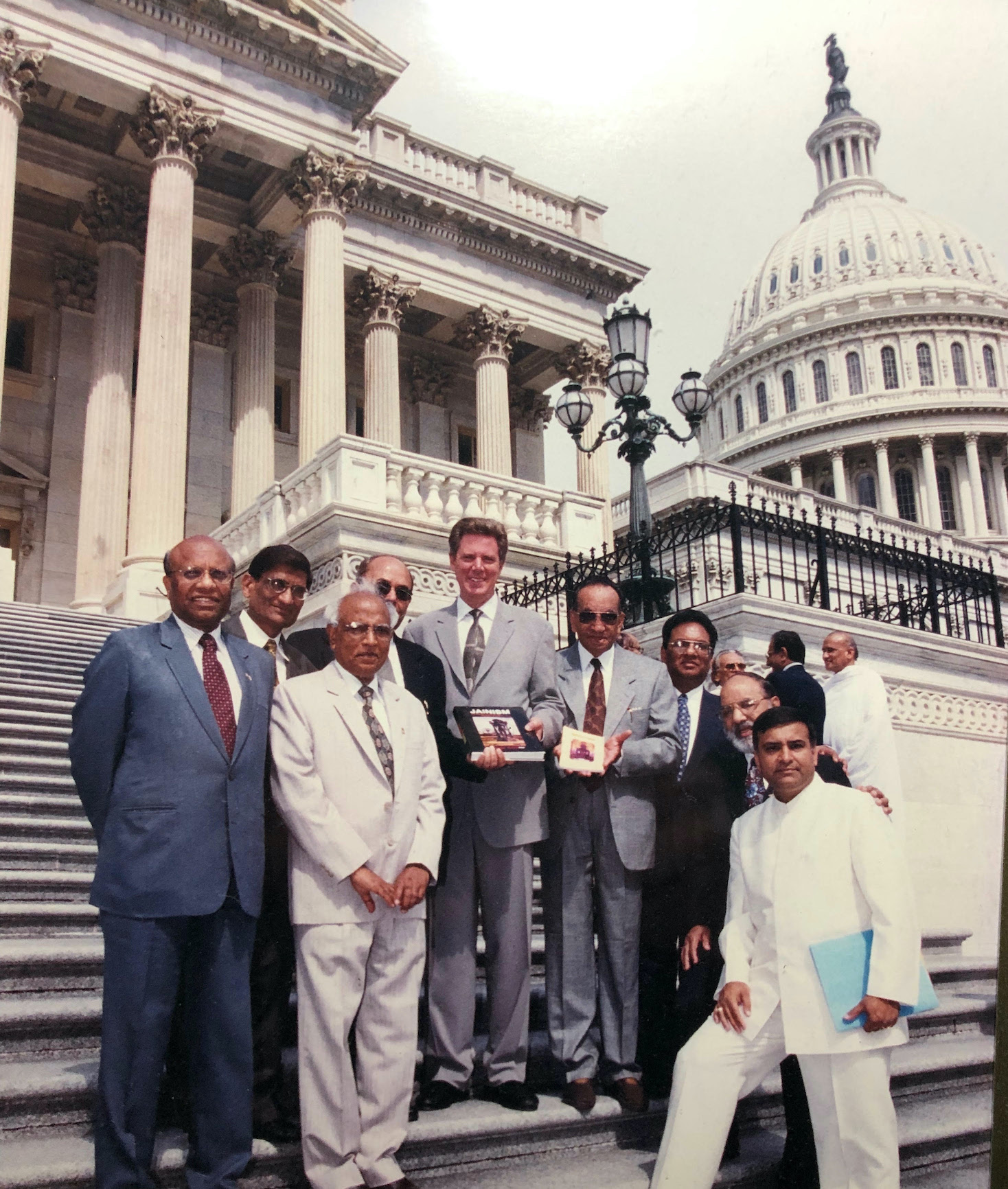 Dr. Pandya did not advertise his philanthropic activities. He spent most of his last 20 years of retirement in India along with his wife Ashaji pursuing a spiritual path with the blessings of Sadhus and Sadhvijis and working with Jain Samaj towards the construction or renovation of many Jain Temples across India. Their latest projects were the construction of a large temple in Tarangaji, Mehsana district, Gujarat, dedicated to Bhagwan Neminath as well as a large Tyagi Bhawan, and the renovation of the Chandkeri Temple near Kota, Rajasthan dedicated to Bhagwan Adinath, and a large Adinath Temple in his birthplace of Guna, MP.

His two sons Sanjay and Rajeev along with their wives Renu and Damyanti and 6 grandchildren have continued the legacy of their father. Sanjay is active in the JCA NY Temple as Benefactor Trustee and Vice Chairperson and Rajeev is active in JAINA as past Chairperson of the JAINA Calendar Committee, Past Regional VP Northeast, Board of JAINA 2019 & 2021 & 2023 Convention, and Chairperson of JITO USA – New York. A blessed family that never tires of giving.

Dr. Mahendra Pandya leaves behind a rich legacy for Jains in North America and India and will be remembered for his generosity, kindness, and living the life of a true Jain Shravak.